Life is a Game of Thrones 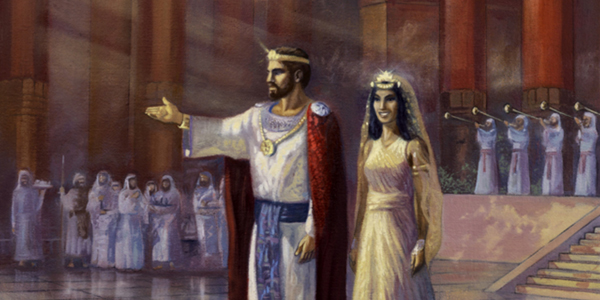 On verses 1-18:  Here the Chronicler describes all the gold that Solomon accumulated on an annual basis (v13-16), the gold and ivory throne that he sat on, which was unlike anything that had ever been made for any other kingdom (v17-19), the possessions Solomon amassed (v20, 24, 27), the connections Solomon had (v21), the audience he attracted (v23),  the horses and chariots he collected (v25, 28), and the territories he ruled over (v26).  Verse 22 sums it up: “King Solomon was greater in riches and wisdom than all the other kings of the earth.”

Yet as impressive as Solomon’s splendor, wealth and wisdom may have been, the sad reality is that none of it lasted and none of it satisfied.   Here the Chronicler is very gentle in his treatment of Solomon, as he barely alludes to Solomon’s moral failures such as his refusal to obey God in the area of marriage (2 Chronicles 8:11; see also 1 Kings 11:1-13) and his obsession with accumulating gold and horses in violation of God’s instructions to kings (see Deuteronomy 17:16-17).  The Chronicler does not mention the crumbling of Solomon’s relationship with God or the depression and disillusionment that resulted.  But Solomon himself would write in the book of Ecclesiastes that all of the riches, fame, possessions, power and wisdom he accumulated were ultimately and utterly meaningless.  Solomon’s son Rehoboam would take over his father’s throne, only to see most of the kingdom that Solomon had worked so hard to build slip through his fingers.

It’s a sobering reminder that:

Only one life ’twill soon be past.
Only what’s done for Christ will last.

As impressive as Solomon’s throne may have been, it did not last.  In contrast, when you read Revelation 4, you read about God’s throne.   Rather than focusing on how impressive the throne itself is, Revelation 4 focuses on how beautiful is the One who sits on that throne and how alive are those that surround the throne.  Praise God.

Life is a game of thrones where the central question is, “Which throne will you live for: Solomon’s throne or Jesus’ throne?”
Where can we find true, satisfying and everlasting life?  It’s when we choose to centre ourselves around the throne of Jesus, worshiping at the feet of the king who reigns forever.

Lord Jesus, Solomon ruled and reigned for 40 years, and then he died.  You are the only King who reigns forever.  Whereas Solomon’s throne did not last, Your throne will last forever.  Instead of spending this life chasing the temporary riches, fame and power of Solomon, may I find true, satisfying and everlasting life at Your throne.  In Jesus’ name, AMEN!
×Scan to share with WeChat