5 Ways You Can Unwittingly Put Your Foot in Your Mouth

Jude 1:8-10 (NIV)
8  In the very same way, these dreamers pollute their own bodies, reject authority and slander celestial beings.
9  But even the archangel Michael, when he was disputing with the devil about the body of Moses, did not dare to bring a slanderous accusation against him, but said, “The Lord rebuke you!”
10  Yet these men speak abusively against whatever they do not understand; and what things they do understand by instinct, like unreasoning animals–these are the very things that destroy them.

On verses 8-10:  The first way that the false teachers in Jude’s time were putting their foot in their mouths was by “heap[ing] abuse on celestial beings” (v8).  In other words, these false teachers would speak slanderous things about God, Satan, angels and demons, perhaps belittling them or making a joke of them.   Jude says that these false teachers were making a mistake, for “even the archangel Michael, when he was disputing with the devil about the body of Moses, did not himself dare to bring a slanderous accusation against him, but said, “The Lord rebuke you!”  (v9).

In other words, be serious and not disrespectful in your speech about God, angels, demons and the devil.  If you are going to engage in spiritual warfare and rebuke the devil, don’t do so flippantly and don’t try to do it in your own name or in your own power.  If you rebuke the devil, do so only in the name of the Lord Jesus and sincerely trusting in the saving power of Jesus’ name, for it is Jesus’ name, not your own, that has defeated the devil.  It is dangerous to try to rebuke the devil if you have not trusted in Jesus first, or to battle the devil in a name other than the name of Jesus. (See Acts 19:13-16 as an example.)

By the way, where else in Scripture does it mention that the archangel Michael disputed with the devil about the body of Moses (v9)?   There is no mention of this in Scripture.   Scholars say that this story comes from a book that is now lost called The Assumption of Moses, which is not part of the Bible.  It appears that Jude believed this story to be true.  Does the fact that Jude refers to this story mean that the Bible should be expanded to include other books?  No.  The apostle Paul would cite poets of his day to help him prove his point, but not necessarily because he considered their words to be God’s Word.   It is enough to treat this story as an interesting reference.

In addition to speaking slanderously about the devil, evil spirits and angels, these false teachers would also “pollute their own bodies” (v8) (probably a reference to engaging in sexually immoral activities and abusing substances that are harmful to the body).   They would also “reject authority” (probably referring to their rebellion against their spiritual leaders).  Their abusive talk (v10a) coupled with their self-centered actions (v10b) would lead to their downfall.

Jude 1:11 (NIV)
11  Woe to them! They have taken the way of Cain; they have rushed for profit into Balaam’s error; they have been destroyed in Korah’s rebellion.

On verse 11:  Here’s a little chart that may help to understand verse 11: 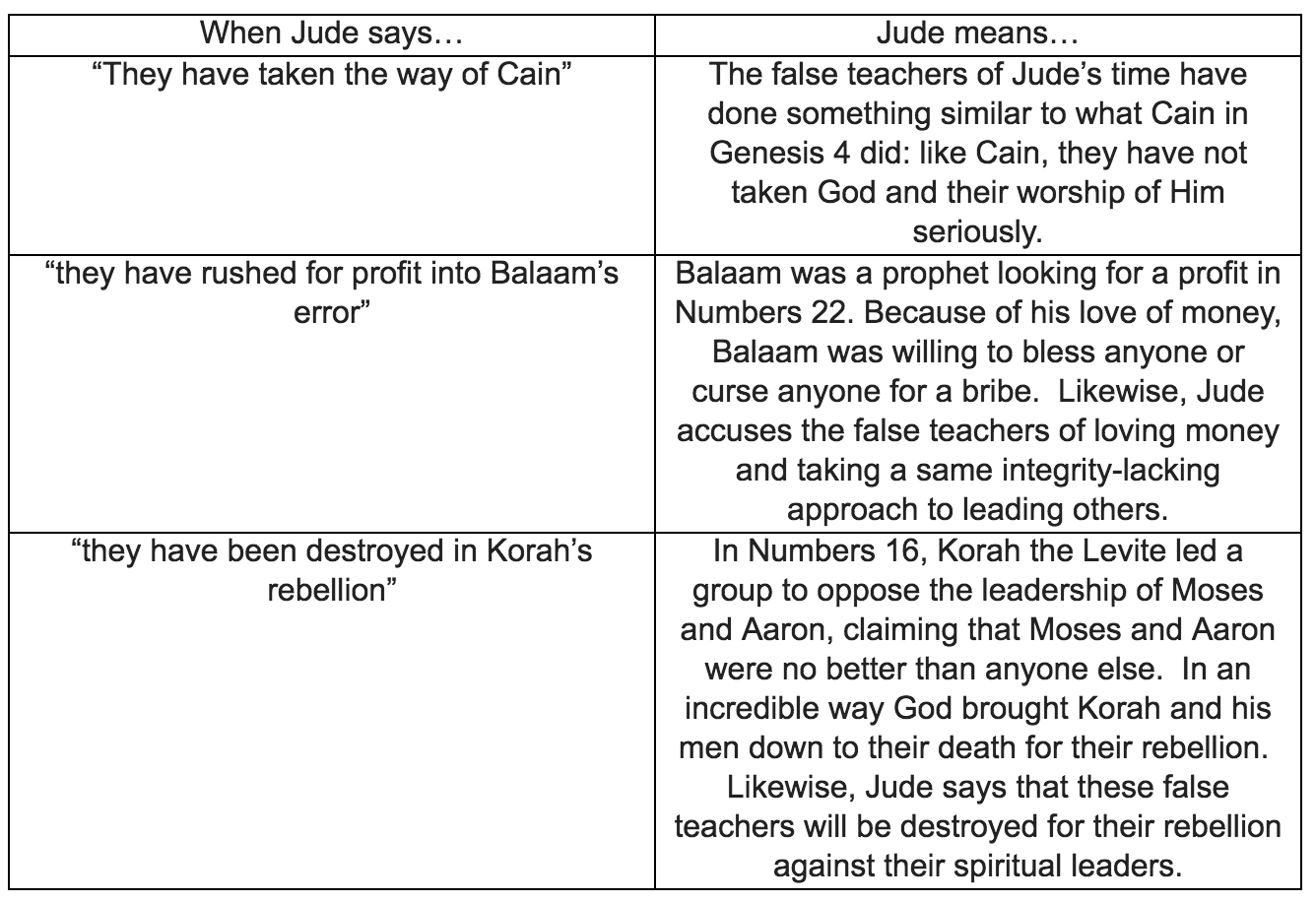 What can we learn from this?  When we don’t take the worship of God seriously like Cain, when we love money more than integrity like Balaam, and when we act seditiously and rebelliously against the authorities God has placed in our lives like Korah, we move far away from the lives God made us to live and suffer as a result.  Unlike Cain, give your best when you worship God.  Unlike Balaam, love integrity more than money.  Unlike Korah, follow, honour and pray for your God-given leaders.

Jude 1:12-15 (NIV)
12  These men are blemishes at your love feasts, eating with you without the slightest qualm–shepherds who feed only themselves. They are clouds without rain, blown along by the wind; autumn trees, without fruit and uprooted–twice dead.
13  They are wild waves of the sea, foaming up their shame; wandering stars, for whom blackest darkness has been reserved forever.
14  Enoch, the seventh from Adam, prophesied about these men: “See, the Lord is coming with thousands upon thousands of his holy ones
15  to judge everyone, and to convict all the ungodly of all the ungodly acts they have done in the ungodly way, and of all the harsh words ungodly sinners have spoken against him.”

On verses 12-15: With poetic imagery Jude describes these false teachers as “blemishes”, “clouds without rain”, “twice dead autumn trees in that they are both uprooted and fruitless” (v12), “wild waves” and “wandering stars” (v13).    Then in verses 14-15 Jude seems to quote from the book of Enoch, a book which was written approximately between 300 and 100 BC and which is not part of the Bible.  Does this mean that the Bible should be expanded to include the book of Enoch?  No.  Neither Jesus nor the apostles ever called the book of Enoch Scripture.  While the book of Enoch was valued by some early church fathers, there was never enough consensus among the apostles and early church fathers to conclude that the book of Enoch deserved recognition as Scripture and it would be unwise for us to try to include it now based on one small quotation from this book.

Jude 1:16 (NIV)
16  These men are grumblers and faultfinders; they follow their own evil desires; they boast about themselves and flatter others for their own advantage.

On verse 16:  Here Jude mentions four other ways that the false teachers put their foot in their mouths:

What can we learn from this?  If you want to avoid the fate of the false teachers, avoid speaking the way the false teachers spoke.  Don’t put your foot in your mouth by speaking grumbling, fault-finding, boastful or flattering words.

Heavenly Father, I pray that I would not be a grumbler, a faultfinder, a boaster, a flatterer or someone who speaks disrespectfully about You or even about my enemy.  May I give You my best when I worship You, love integrity more than money, and honour my God-given leaders.  In Jesus’ name, AMEN!