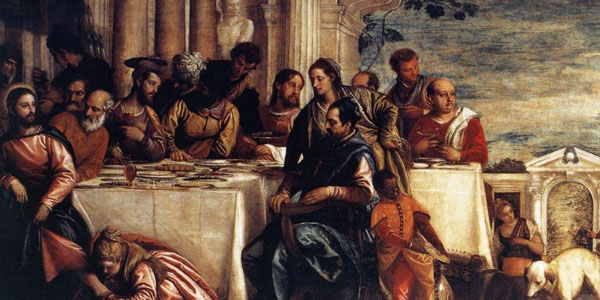 Luke 14:12-14 (NIV)
12  Then Jesus said to his host, “When you give a luncheon or dinner, do not invite your friends, your brothers or relatives, or your rich neighbors; if you do, they may invite you back and so you will be repaid.
13  But when you give a banquet, invite the poor, the crippled, the lame, the blind,
14  and you will be blessed. Although they cannot repay you, you will be repaid at the resurrection of the righteous.”

On verses 12-14:  When you serve others, don’t just serve those from whom you think you can get something back in return.  Serve those who can’t repay you, and in so doing you store up treasure for yourself from heaven.

Luke 14:15-24 (NIV)
15  When one of those at the table with him heard this, he said to Jesus, “Blessed is the man who will eat at the feast in the kingdom of God.”
16  Jesus replied: “A certain man was preparing a great banquet and invited many guests.
17  At the time of the banquet he sent his servant to tell those who had been invited, ‘Come, for everything is now ready.’
18  “But they all alike began to make excuses. The first said, ‘I have just bought a field, and I must go and see it. Please excuse me.’
19  “Another said, ‘I have just bought five yoke of oxen, and I’m on my way to try them out. Please excuse me.’
20  “Still another said, ‘I just got married, so I can’t come.’
21  “The servant came back and reported this to his master. Then the owner of the house became angry and ordered his servant, ‘Go out quickly into the streets and alleys of the town and bring in the poor, the crippled, the blind and the lame.’
22  “‘Sir,’ the servant said, ‘what you ordered has been done, but there is still room.’
23  “Then the master told his servant, ‘Go out to the roads and country lanes and make them come in, so that my house will be full.
24  I tell you, not one of those men who were invited will get a taste of my banquet.'”

On verses 15-24:  What is the point of this famous parable from Jesus?  There is no greater blessing than to “eat at the feast in the kingdom of God” (that is, to be saved and to be a part of God’s kingdom).  Yet receiving this blessing is not a priority for many people.  That’s why in Jesus’ parable, different characters are invited to the banquet but make excuses for not going.  These characters represent people who are caught up in the small things of life such that they miss God’s calling on their lives.  They end up forfeiting the greatest blessing because they were too caught up in little things that didn’t matter.  Still, God wants His house to be full and keeps inviting people to come until His house is full.

All of us have been invited to take part in the feast that is God’s kingdom.  May we not ignore or decline God’s invitation because we were so caught up in less important things.

Heavenly Father, thank You for inviting me to Your banquet table and to be a part of Your kingdom.  May I not ignore or decline Your invitation because I was too caught up in smaller things that don’t matter nearly as much.  In Jesus’ name, AMEN!