Born to Be a Blessing 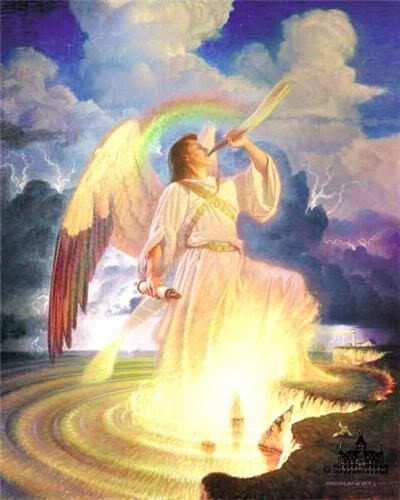 Revelation 10:1-4 (NIV)
1  Then I saw another mighty angel coming down from heaven. He was robed in a cloud, with a rainbow above his head; his face was like the sun, and his legs were like fiery pillars.
2  He was holding a little scroll, which lay open in his hand. He planted his right foot on the sea and his left foot on the land,
3  and he gave a loud shout like the roar of a lion. When he shouted, the voices of the seven thunders spoke.
4  And when the seven thunders spoke, I was about to write; but I heard a voice from heaven say, “Seal up what the seven thunders have said and do not write it down.”

On verses 1-4:  Revelation is full of strange and awesome creatures: living creatures, fallen angels, the scariest locusts ever conceived, crazy “horses”, the list goes on.  Sometimes I think that if Pokemon could be transported into the world of Revelation, Pikachu, Charmander and all their Pokemon friends would look at some of the creatures in Revelation and think, “They’re so weird.”  Here in these verses we meet the next awesome creature in Revelation:  a mighty angel whose shout like a lion causes the voices of the “seven thunders” to speak (v3).  What are the seven thunders?  It is not clear.  Also, it is not clear to us what they said because after hearing what the seven thunders say John is commanded by a voice from heaven to seal up what the seven thunders said and not to write it down (v4).

What can we learn from this?  There is good news from heaven that God wants us to share with everyone.  That good news is summed up by John 3:16: God loved the world so much that He gave His only Son Jesus, such that whoever believes in Jesus will not perish but have eternal life.  But there may be times in your relationship with God when God may tell you something that He wants you to keep between you and Him.  That’s what intimate friendships are like.  Close friends know and keep each other’s secrets.

On verses 5-7:  The mighty angel then swears to God (the One “who lives for ever and ever, who created the heavens and all that is in them, the earth and all that is in it”) (v6a) and proclaims that there will be no more delay in accomplishing all that God said He would do through the prophets (v6b-7).
What can we learn from this?

Likewise, since you are made in God’s image:

Revelation 10:8-11 (NIV)
8  Then the voice that I had heard from heaven spoke to me once more: “Go, take the scroll that lies open in the hand of the angel who is standing on the sea and on the land.”
9  So I went to the angel and asked him to give me the little scroll. He said to me, “Take it and eat it. It will turn your stomach sour, but in your mouth it will be as sweet as honey.”
10  I took the little scroll from the angel’s hand and ate it. It tasted as sweet as honey in my mouth, but when I had eaten it, my stomach turned sour.
11  Then I was told, “You must prophesy again about many peoples, nations, languages and kings.”

On verses 8-11:  John is told to take the scroll in the hand of the mighty angel.  John approaches the angel and asks for the scroll.  The angel tells John to take it and eat it, promising that it will be sweet to his taste but sour for his stomach.  John finds that to be the case and is told to prophesy again about many peoples, nations, languages and kings.
What can we learn from this?  There is some important lessons here, especially for those of us who want to communicate God’s Word to others effectively.

Heavenly Father, thank You that I am fearfully and wonderfully created by You.  Thank You for making me for a great purpose.  I proclaim that I am born to be a blessing.  As long as there is breath in me, may I be a blessing to those around me.  Like You, may I use the power I have to speak life to others, keeping my word and finishing the race You have given me to run.  In Jesus’ name, AMEN!