Marked By God For Protection 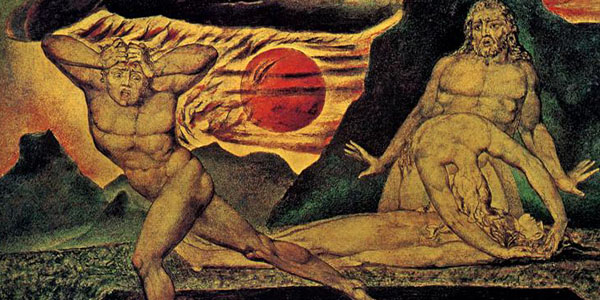 Genesis 4:13-15 (NIV)
13  Cain said to the LORD, “My punishment is more than I can bear.
14  Today you are driving me from the land, and I will be hidden from your presence; I will be a restless wanderer on the earth, and whoever finds me will kill me.”
15  But the LORD said to him, “Not so; if anyone kills Cain, he will suffer vengeance seven times over.” Then the LORD put a mark on Cain so that no one who found him would kill him.

On verses 13-15: Realizing that the punishment for his sin is that he will be hidden from God’s presence and vulnerable to attack, Cain cries out to God.  Was Cain asking for forgiveness or just complaining about his punishment?  While some commentators think Cain was asking for forgiveness, it would seem to me based on the text probably the latter.  Yet God has mercy on Cain, placing a mark on him so that no one would kill him (v15).

The image of God marking Cain to protect him reminds me of Ephesians 1:13, where Paul says to the Christians in Ephesus, “[h]aving believed, you were marked in him with a seal, the promised Holy Spirit” (Ephesians 1:13).  When we believe, we are marked by the Holy Spirit and the blood of Jesus, which protects us from the ultimate punishment for our sin, being separation from God.

On verse 16:  “Nod” literally means wandering.  Like Cain, we can either live in God’s presence where we find peace and purpose or we will find ourselves lost in the land of wandering.

Genesis 4:17a (NIV)
17  Cain lay with his wife, and she became pregnant and gave birth to Enoch…

On verse 17a:  If Adam and Eve were the first and only human beings and gave birth to Cain and Abel, where did Cain’s wife come from?  Many scholars respond that Adam and Eve, given their long life span, probably had other children and that Cain’s wife was one of them.

Genesis 4:17b-24 (NIV)
17   …Cain was then building a city, and he named it after his son Enoch.
18  To Enoch was born Irad, and Irad was the father of Mehujael, and Mehujael was the father of Methushael, and Methushael was the father of Lamech.
19  Lamech married two women, one named Adah and the other Zillah.
20  Adah gave birth to Jabal; he was the father of those who live in tents and raise livestock.
21  His brother’s name was Jubal; he was the father of all who play the harp and flute.
22  Zillah also had a son, Tubal-Cain, who forged all kinds of tools out of bronze and iron. Tubal-Cain’s sister was Naamah.
23  Lamech said to his wives, “Adah and Zillah, listen to me; wives of Lamech, hear my words. I have killed a man for wounding me, a young man for injuring me.
24  If Cain is avenged seven times, then Lamech seventy-seven times.”

On verses 17b-24:  The rest of verse 17 describes Cain building a city, naming it after his son Enoch, while verses 18-22 describe the descendants of Cain. Lamech, one of Cain’s descendants, boasts about having killed a man who had merely wounded him (v23-24).  The vengeance that Cain showed we see being re-enacted here in Cain’s future generations.  It’s a reminder that we want to get rid of malice, vengeance and anger from our own lives, lest we end up hurting others, including affecting future generations after us.

Genesis 4:25 (NIV)
25  Adam lay with his wife again, and she gave birth to a son and named him Seth, saying, “God has granted me another child in place of Abel, since Cain killed him.”
26  Seth also had a son, and he named him Enosh. At that time men began to call on the name of the LORD.

On verses 25-26:  After losing their son Abel and virtually losing their son Cain, Adam and Eve have another child.  Eve names him Seth (which means “granted”), saying that God has granted her another child in Abel’s place.  Seth would be a comfort to Adam and Eve in their loss.  What can we learn from this?  God is a comforter to the broken hearted.  He places people in our lives to remind us of His comfort in our time of grief.

Heavenly Father, thank You that by faith in Jesus Christ we are marked by You and protected by You.  In Jesus’ name, AMEN!