Wisdom from the Father 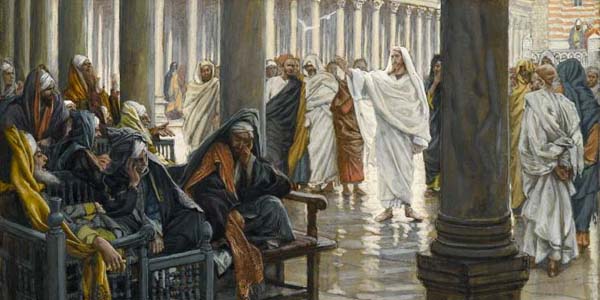 John 7:14 (NIV)
14  Not until halfway through the Feast did Jesus go up to the temple courts and begin to teach.

On verse 14:  The Feast of Tabernacles lasted 8 days.  According to some scholars, it had been approximately 18 months since the last time Jesus visited Jerusalem.  Many were expecting Jesus to make a public appearance at the Feast, but Jesus does not appear when everyone expects.  Only when the Feast is halfway through did Jesus begin to teach in the temple courts.  There he amazes the crowd with his teaching.

John 7:15 (NIV)
15  The Jews were amazed and asked, “How did this man get such learning without having studied?”

On verse 15:  When the Jews ask, “How did this man get such learning without having studied?”, some scholars read this as the Jews simply being amazed that a man without formal rabbinical training like Jesus could teach with such wisdom and power.  However, there is probably also a streak of skepticism in their question as well.  In other words, the Jews who questioned Jesus were challenging Jesus’ authority and credentials to teach.  It’s as if they were saying, “You haven’t been to our schools.  What gives you the right to express your own opinions this way?  You’re not a real rabbi, just a self-proclaimed teacher.”

John 7:16-17 (NIV)
16  Jesus answered, “My teaching is not my own. It comes from him who sent me.
17  If anyone chooses to do God’s will, he will find out whether my teaching comes from God or whether I speak on my own.

On verse 16-17:  In response to his critics challenging his credentials and questioning his authority to teach, Jesus says two things: First, his teaching is not his own but comes directly from the Father, “from Him who sent me” (v16).

Second, Jesus says that anyone who chooses to do God’s will will be able to tell if he is merely a self-proclaimed teacher or if his teaching is truly from God.  How does that work?   The phrase “if anyone chooses to do God’s will” (v17) reminds me of Micah 6:8 where it says, “He has showed you, O man, what is good. And what does the LORD require of you? To act justly and to love mercy and to walk humbly with your God.” God’s will is that we act with justice, love mercy, and walk with humility.  Perhaps one way to understand verse 17 is: if you are committed to these 3 things – justice, mercy and humility – you will see that Jesus’ teaching is from God.

John 7:18 (NIV)
18  He who speaks on his own does so to gain honor for himself, but he who works for the honor of the one who sent him is a man of truth; there is nothing false about him.

On verse 18:  Whereas a self-proclaimed teacher looks to gain honour for himself, Jesus works for the honor of the Father who sent him. Thus there is no self-interest in Jesus (“nothing false about him”).  Thus we can trust what Jesus has to say.

On verse 19:  Previously, when Jesus had healed the crippled man at the pool of Bethesda in Jerusalem, the Jews tried to kill Jesus (see John 5:18).  So now, 18 months later, Jesus is back in Jerusalem.  In verse 19 he is pointing out the hypocrisy of the Jews who on one hand claimed to follow the law of Moses but who on the other hand were clearly violating it by plotting Jesus’ murder.

John 7:20-23 (NIV)
20  “You are demon-possessed,” the crowd answered. “Who is trying to kill you?”
21  Jesus said to them, “I did one miracle, and you are all astonished.
22  Yet, because Moses gave you circumcision (though actually it did not come from Moses, but from the patriarchs), you circumcise a child on the Sabbath.
23  Now if a child can be circumcised on the Sabbath so that the law of Moses may not be broken, why are you angry with me for healing the whole man on the Sabbath?

On verse 24:  Jesus gives some sound advice to his critics: “stop judging by mere appearances, and make a right judgment.” (v24)  We would be wise to heed this advice too.  Whenever we make false judgments, it’s because we haven’t thoroughly understood the situation and only jumped to conclusions based on appearances and first impressions.  When we do that, we’re no better than the critics who misjudged Jesus. We need to be wiser than that.  Don’t jump to conclusions based on appearances alone, but give careful thought to the situation first.

Lord Jesus, I praise You for having wisdom from the Father, wisdom which I want to have as well.  I pray for wisdom today, that whenever I see situations that concern me, I wouldn’t make judgments based on mere appearances only.  Instead by Your wisdom and grace please help me to make right judgments based on a thorough and sound understanding of the situation.  In Jesus’ name, AMEN!