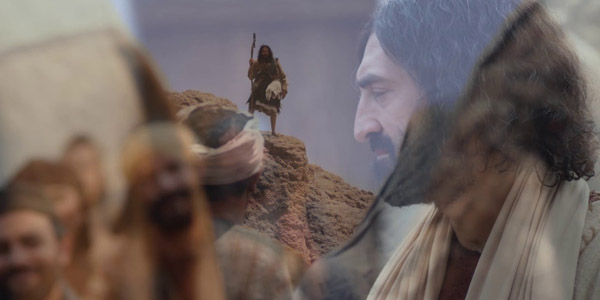 On verses 24-27:  Jesus’ friendship with John was one typified by mutual honour and respect.  Despite both of them being the most prolific preachers Israel had ever seen, there was seemingly no competition between Jesus and John.  Whether in private or in public, Jesus and John honoured one another. We see an example of this here as Jesus backs up his cousin John at a time when John was imprisoned for speaking out against King Herod’s incestuous relationship with Herodias.  Many in the crowd listening to Jesus were likely followers of John who were now following Jesus, just as John encouraged them to do (John 1:35-37).  Listen to what Jesus says of John. To paraphrase Jesus in verses 24-27, “You didn’t travel long distances to a dry and difficult place like the desert just to hear someone whose opinions were nothing more than the product of popular opinion (“a reed swayed by the wind” – v24), or to hear someone living in ease and luxury (“a man dressed in fine clothes” – v25).  Instead you went out to the desert to hear a prophet, and not just a prophet (v26), but the one who himself is the fulfillment of Old Testament prophecy, a unique and singular messenger sent by God to prepare the way for the Messiah (v27).”  That’s how Jesus described his cousin John.  In the next verse Jesus will tell the crowd that they will not find a human being alive on this earth who is greater than John (v28).  That’s how much respect and admiration Jesus had for John the Baptist.

What can we learn from this?

Luke 7:28 (NIV)
28  I tell you, among those born of women there is no one greater than John; yet the one who is least in the kingdom of God is greater than he.”

On verse 28:  As discussed above, Jesus gave John the highest compliment when he said, “among those born of women there is no one greater than John” (v28).  But what does Jesus mean when he says, “yet the one who is least in the kingdom of God is greater than he”?  It means that whereas John was preparing the way for Jesus and his kingdom to come, we who trust in Jesus Christ actually get to experience and be part of Jesus’ kingdom.  We get up close and personal access to something that John was only able to see from a distance.  In this way, even the least believer in Jesus’ kingdom is “greater” than John.

Here’s an illustration that might help:  if Jesus’ kingdom could be compared to a house, John spent his entire life paving a road that leads to that house. John paved that road so that people could easily get to that house, but John himself never got to enjoy that house in all its glory. At the end of the road that John paved, Jesus came and built this glorious house. Now everyone who places their trust in Jesus gets to live in that house and enjoy the full benefits of that house. In this way, we as New Testament believers living under a new covenant that Jesus established are “greater” than John because we get to access blessings John never got to have during his lifetime.

Luke 7:29-35 (NIV)
29  (All the people, even the tax collectors, when they heard Jesus’ words, acknowledged that God’s way was right, because they had been baptized by John.
30  But the Pharisees and experts in the law rejected God’s purpose for themselves, because they had not been baptized by John.)
31  “To what, then, can I compare the people of this generation? What are they like?
32  They are like children sitting in the marketplace and calling out to each other: “‘We played the flute for you, and you did not dance; we sang a dirge, and you did not cry.’
33  For John the Baptist came neither eating bread nor drinking wine, and you say, ‘He has a demon.’
34  The Son of Man came eating and drinking, and you say, ‘Here is a glutton and a drunkard, a friend of tax collectors and “sinners.”‘
35  But wisdom is proved right by all her children.”

On verses 29-35:  Unlike the masses who flocked to John the Baptist’s message and were baptized by John (v29), the Pharisees and teachers of the law had rejected John the Baptist (v30). Now they were rejecting Jesus as well.  So in verses 31 to 34 Jesus compares the situation to Pharisees and teachers of the law to stubborn children who are difficult to please.  For John came preaching the kingdom of God as an austere aesthetic living an extremely simple life and the Pharisees rejected him (“we sang a dirge and you did not cry” – v33).  Jesus came preaching the kingdom of God as a normal guy who joyfully ate and drank with the common people and the Pharisees rejected him (“We played the flute for you and you did not dance” – v33).  Despite the Pharisees rejecting both John and Jesus, Jesus says that he and John (who are both “children” of wisdom – v35) and their preaching about God (who is “wisdom”) will be shown to be true after all (v35).

What can we learn from this?  No matter how hard you try there will be certain people in life that you will never be able to please.  You don’t need to.  Live for God’s approval and focus simply on doing what God has called you to do.

Heavenly Father, may I be one who honours others above myself, who appreciates and never takes for granted the blessings that come with being in Your kingdom, and who lives not for the praise of people but to please You.  In Jesus’ name, AMEN!
< [/av_textblock] [/av_one_full]